It’s been a year of persevering through COVID and injuries for the Gore Pirates as they prepare for the Class A playoffs. But through it all has been the steady play of sophomore brothers Gabe and Gunner Dozier. For the Pirates, the season started with the loss of standout quarterback Weston Shanks and then their first two games were COVID casualties.

“We’ve had to overcome some adversity that’s for sure but we’re settling in,” said veteran coach Brandon Tyler. “Gabe and Gunner have been steady forces for us all through the past two seasons. They both started as freshmen with Gunner playing linebacker and tight end and Gabe playing both ways on the line. They’re just two great kids who bring a great work ethic to practice that carries over into the games.”

The Dozier brothers got started playing through a chance observation according to Gabe.

“We were just riding down the road one day when we were young and we saw some kids out playing pee-wee ball and decided we wanted to get into that,” said the older Dozer. “I guess growing up I looked up to my cousin Ethan James who was an All-State lineman here several years ago. He taught me a lot about footwork and what it takes to be a good lineman.”

Gunner spent a lot of his early years playing running back until last year when he became a tight end so it was a double whammy of learning a new position and adjusting to high school at the same time.

“I was a little nervous last year because I knew the high school game would be a lot faster than junior high and learning the tight end position was a challenge but after I got rid of the butterflies in our first game, I was fine.”

Though he did run the ball in a backup role last year, Gunner feels a little more at home of late as Tyler had to move him to tailback while limiting his linebacker play where he led the team in tackles last year to keep him fresh.

So is there a lot of brotherly competition between the two?

“Yeah, I’d say so,” laughed Gabe. “Especially when we’re both playing defense and we’d compete to see who got the most tackles.”

Both brothers play baseball and compete in powerlifting in addition to their football endeavors and they’re also active in FFA where they weld and build things says Gabe. As far as leisure time activities, it’s pretty easy to figure this time of year.

As the 2020-21 basketball season begins for the McCurtain Lady Bulldogs, memories of a trip to the Class B state tournament remain a...

The movement restrictions imposed by the coronavirus made seeing friends difficult for a lot of folks during the spring and summer. But... 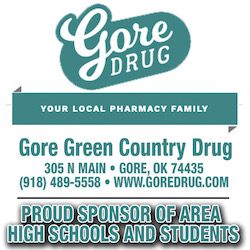